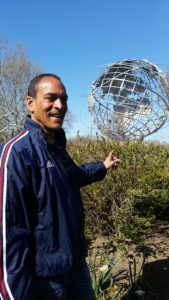 I’ve been interested in history and development literally since I can remember—and graduated with a history degree from Dartmouth and studied economic development at the Fletcher School at Tufts.  Landing in New York City for work after graduate school, I was blown away by what an incredibly rich and complex lab for human development New York City has always been—and I’ve been vigorously exploring it ever since.

Luckily for me, most of my day jobs dovetailed with my natural interests.  In fact, learning as much as I could about NYC—its history and economic drivers, and its workings from the grassroots level up—has been an important part of my work.  I spent several years in City government economic development agencies in various capacities—from driving all over the five boroughs to explain financial incentives to small manufacturing firms and local development officials, to researching policy initiatives.  I then spent many years in Public Finance for the City, eventually serving as Deputy City Comptroller, before moving to an investment bank to focus on developing City business for them.

Along the way I got specifically interested in Queens and moved here—drawn in by the beach and vast wildlife reserves unique to the borough that remind me of where I grew up near San Francisco.  I quickly developed an on-going fascination with the rest of Queens’ underappreciated history and cultural assets, a number of which have national significance.  And today, Queens’ unique evolution into the poster child for immigration and diversity makes it even more compelling for me—especially now.

As compelling as the history of Queens is though, the what’s happening now part of living in the most culturally diverse part of any city on earth is at least as interesting. That’s why I’ve also for years been on the boards of local cultural and community development organizations; continuously exploring the always expanding variety of music, food, drinking spots, art, and other events that are on tap in Queens. I’ve shared my discoveries by writing about “Queens stuff” for Time Out New York, the Daily News and other publications.  I look forward to sharing my Queens knowledge with you.  Hope to see you on one of my tours soon!